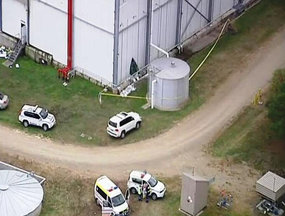 A build-up of ice is being blamed for the death of a Taiwanese national who was crushed in an abattoir freezer yesterday in front of his helpless friends.

The dead man, identified by friends as Oskar Lin, 29, was cleaning out a “blast freezer” at the large Primo Smallgoods site at Scone when a five-metre-high ceiling gave way and fell on him about 7am.

Mr Lin, who had been working at the plant for just over a month, was killed instantly as two friends working just metres away watched.

“They had been standing next to him less than two minutes before it happened and were only at the other end of the freezer when the block of ice hit him,” another Taiwanese worker, who identified himself Max, said.

About 290 workers were evacuated from the Moffat Drive site as emergency workers tried to determine whether other sections of the abattoir were safe.

A section of the exterior wall was also cut so search and rescue officers could look at the interior freezer section.

“It appears that an ice build-up in the ceiling would have contributed to the collapse,” Inspector Guiana said.

Other freezers used in different parts of the site remained operational and workers were back on the job yesterday.

Friends said Mr Lin had travelled from Taipei for an 18-month working holiday and had met several of his countrymen at a Brisbane farm last year.

They had travelled to Melbourne and then Tamworth to work before turning up at Scone less than two months ago.

Max said there were about 25 Taiwanese nationals working at the Scone abattoir as well as about 100 Chinese nationals.

Mr Lin’s family had been notified and were understood to be travelling to Australia last night.

Reports that his brother was also working at the plant were incorrect.

Workcover NSW and police are conducting separate investigations into the incident.

Story from The Newcastle Herald accessed at http://www.theherald.com.au/news/local/news/general/visiting-worker-dies-in-ice-fall/2126461.aspx on 13 April 2011.