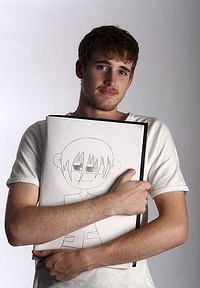 ANDREW de Koster used to love drawing, sometimes spending hours engrossed in his art. ”Art was my thing – cartoons especially,” he says. ”I could draw a cartoon in a matter of seconds.”

But now the 19-year-old struggles to use a pen. Turning a key, handling a zipper, throwing a ball and eating with a knife and fork have all become difficult – since he lost part of his thumb to a bandsaw while working at a Victorian abattoir.

Mr de Koster was 17 when a job placement agency pointed him to the Wodonga meatworks, operated by private company Norvic Food Processing. He started off packing meat, then was put on the bandsaw, a powerful machine used to cut up entire carcasses. It was heavy work, but he didn’t mind. ”To me it was a job,” he says. ”It was money in the bank.”

One day, while he was slicing a cow’s forequarter, his right thumb ended up in the path of the blade. He was rushed to hospital and had surgery the next day. Two years later, he still suffers intense pain.

”It is hard to explain. It is just really, really bad,” he says. ”When I knock it, the pain is beyond excruciating – and it doesn’t go away.”

Mr de Koster received a one-off compensation payment through WorkCover but is considering suing the abattoir and the labour hire company that employed him at the meatworks. He says his work prospects have been severely restricted, and he believes he has ”no chance whatsoever” of pursuing an artistic career.

”There’s a lot of things in life that you need a thumb for,” he says.

Jon Hayes, the general manager of the Wodonga abattoir, defended the company’s safety record and training regime: ”We take workplace safety very seriously – we are not a fly-by-night company.”

Mr Hayes told The Sunday Age that the abattoir paid one of the lowest WorkCover premiums of any in the state – about 5 per cent, well below the industry average of 7.72 per cent.

He said Wodonga’s premium would be even lower if it weren’t for those abattoirs with poor safety records who forced up the premiums of the whole industry.

”We are not all thugs,” he said. ”There are some people doing a very good job, that are serious about this matter.”

He said that since Mr De Koster’s injury, the abattoir was investigating new technology to replace the bandsaw.